Everyone Can’t Be Your Target Audience

As I record this, it is May 21, 2020, and we are still dealing with the pandemic. This resulted in a lot of zoom meetings. When I'm trying to help a new podcast, and I'll be trying to get them to tell me their target audience. “Oh, it's for everybody, ” they say. I will answer, “Seriously, who is your podcast for?” They will again say, “everybody.”

But as I was in a zoom meeting, with about, I'm going to say twenty people instead of six, the bigger the zoom meeting, in many cases, the worse the information. Why? Because you've got some people that are not really cut out for whatever the topic is. They just don't fit or in some cases, and there's nothing wrong with this, we all have our first zoom meeting, but you have the people who have never used zoom. They're sitting there and you're looking straight up their nostrils, and they're asking, “Can you hear me? Can you hear me?”

That can lessen the effectiveness of the meeting.

So what is my point?  I'm in a class right now, and there's somebody who is going to build a community, which is very similar to building a podcast. The community it was about parenting. Well, that's, that's a pretty big group. Later, he said, “Well, I want to niche down to African American parents. Then the more he talked about it, and the more you could see his true passion, he was really trying to reach male, African American fathers.

Now, when you do that, what happens? Well, you cut out a big chunk of your potential audience. But in many cases, you're going to end up with a smaller group, but a much more passionate group, a much more focused group. And in some cases, when you get those people together, there's a bonding amongst the other groups that you just don't get when you try to mix everybody in there. The point being big groups are not always the best for really communicating with people.

I do “office hours” for the school of podcasting and I get a handful of people and I help them. There are rare occasions when its me and one student. We can dig deep into what they are working on and I end up making more of an impact with one person, than trying to help ten at the same time.

You don't need all the people. You need the Right people. 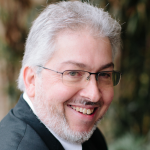 Facebook-f
Twitter
Instagram
Dave is my number one guy when it comes to podcasting. The School of Podcasting is a great community. Not only do you have access to Dave, you have a group of highly successful super knowledgable podcasters that can advise you on SEO to better hosting skills to podcasting news, to the latest acquisitions and mergers in the podcasting industry. Whatever you need to know this group of people has the answer for you. !